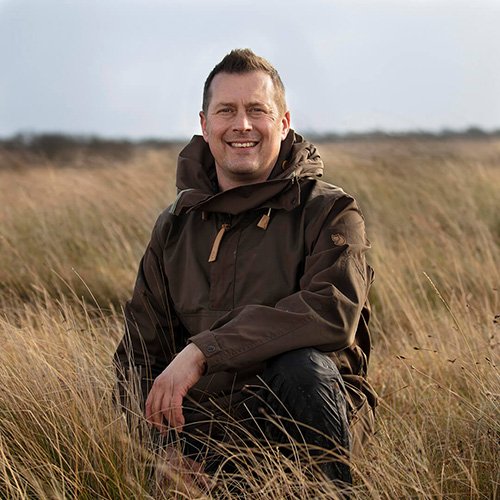 Richard Birchett is a published and award-winning British wildlife and conservation photographer based in Cornwall, England. He spent the previous 22 years in the UK military as a survival specialist. Richard adapts his skills as a pathfinder, allowing him to track, stalk, and photograph wildlife in all environments. Richard finds all nature fascinating; he was a naturalist long before picking up a camera, and he is happy being in the field regardless of his success in capturing an image.

Richard joined Nature First as he felt image-making in nature was no longer enough as he wanted to become a better voice for nature. Having seen the increased popularity of nature photography, he’s sadly witnessed the subsequent impact it has on the environment, and he wants to protect it and promote safe and ethical nature photography.

How old were you when you first discovered your love of nature? What prompted this?

From the age of ten, I was always interested in what the natural world had to offer, especially that of birds, which led me to join the Young Ornithologist Club (part of the Royal Society for the Protection of Birds). The desire to get close and hone my skills of stalking, watching, and understanding the avian subjects was key in allowing me to get my images.

How long have you been a photographer? What got you interested in photography?

I’ve been a photographer for over 35 years. Birds fascinated me, especially birds of prey, particularly the barn owl. After seeing these owls for the first time, I was hooked, and I wanted to experience so much more. When I reached the age of ten, I purchased my first camera, a Canon AE-1 with a 50mm lens, all of which was quite limiting for wildlife photography.

What led you to become active in Nature First?

I wanted to join an organization where like-minded people come together to share their passion for ethical nature photography and spread the word, and teach others how to respect nature and the environment at large.

What kind of behavior distresses you the most? Do you have an example of this? How would you tie this into the Nature First principles?

In general, a lack of respect for the environment and nature, impeding a wildlife subject’s space to move, and doing anything for a photograph at the expense of the animal’s welfare is all distressing behaviors for me. Recently, I was in Scotland filming and photographing the highly protected hen harrier. I witnessed many photographers encroaching near the nest site despite the bird’s alarm calling. The photographers were incessant until they had their fill of images. As a Nature First ambassador, I will promote safe and respectful nature photography to all; with enjoyment comes responsibility.

If you had a magic wand that teleported you anywhere, where would you be taking pictures now? Why there?

Now that’s a tricky one… Probably Africa, India, and Antarctica, with a very long list for the rest!

If we were to have a bite to eat together, what would we be likely to talk about besides photography and Nature First?

We would be talking about where we see the world in the years ahead and how we would right all the wrongs we see and make it a better place to live.

Polski
Thanks for subscribing!